Convention on Trafficking of Women with disabilities

A Convention on Trafficking of Women with disabilities and its Underpinning Causes was organized by aaina on 7th and 8th December 2015. U.S. Consul Hyderabad, was the supporting partner for the convention. The objective was to create visibility of specific vulnerability women with Disability to trafficking and pinpoint areas that need attention to minimize the same. The convention was a platform for service providers, officers from legal, government and non government departments to exchange information on this particular sensitive issue.
Mr. Gabriel Hons-Olivier, Public Affairs Officer U.S Consulate (Hyderabad), Dr. Minati Behera State Commissioner for Persons with Disabilities, Ms. Bishakha Bhanja, Convener Jajnaseni, Ms. Lalita Missal, President aaina, Dr. Amrita Patel, Project Director, State Resource Center o Women (WCD Dept), Ms. Sujata Jena, Advocate Odisha High Court, Mr. Manoj Tripathy, Program Manager (ICPS) were amongst the esteemed guests.
Current scenario of trafficking of women with disability at national and state level, policies and practice, specific vulnerability of Women with Disability to Trafficking legal frame work and case study discussions were the main highlights of the convention. Trafficking in the form of forced labor and marriage were the two most common forms if trafficking for Women in Odisha, Women with disability were the most vulnerable due to low self esteem, lesser access to job, no support structure and unequipped shelters to facilitate their rehabilitation.
Where on one hand the discussions created much needed awareness for many who were naďve to the particular subject, it also identified the gaps in functioning in governmental and non government organizations that have been working on the issue. Policy intervantions at state and national level were identified as well.
Community level intervention, Girl's education on the issue, implementation of anti trafficking and anti poverty schemes, proper prosecution, advocacy to amend interstate migrant workmen act 1979 and review of ILO convention 159 (vocational rehab of PWD's) and lobby with the government were the major areas needing attention in future 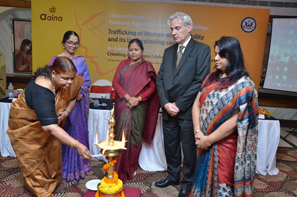 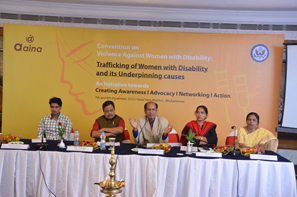 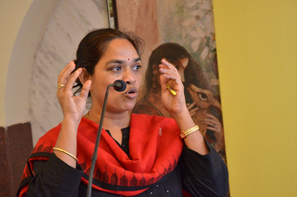