More than 250 people gathered at Swosti Premium to celebrate Global Menstrual Hygiene day organized by aaina with the support of Water Aid, UNICEF, NAWO, NHM, SWSM & Gram Vani. With an objective of bringing the issue at a wider scale with a bigger impact, aaina organized MHM day for the 2nd time. Authorities from SWSM, Water aid, UNICEF, WRC, WCD , and Medical professionals were invited as esteemed guests. As the focus this year was to target service providers to take the issue of menstrual hygiene forward, Asha workers and Angan Wadi workers were the majority. Others included adolescent girls from rural schools, workers from Kishori Balika Mandal, WSHG members, Gender coordinator from SSA, IEC coordinator of DWSM.
Ms. Bisakha Bhanja, Water Aid, discussed menstruation as a natural and biological phenomenon that needed to be discussed openly. She believed that shame and silence had to be broken in order to take any step towards menstrual hygiene. Roles of gender coordinator, teachers, Asha workers, Angan Wadi workers as first line coordinators was stressed who needed to communicate about menstruation with girls and mothers.
Ms. Sneha Mishra, secretary aaina, discussed the study results of "Viability of producing low cost sanitary napkins with special focus on girls and women with disability." Subsidization of sanitary napkins by government, maintenance of quality, accessibility of information on menstruation, availability of information in Braille and audio format and breaking of taboos were few of the vital points brought forward. As far as production units were concerned, the scalability of sanitary napkins was discussed as important along with central marketing.
Authorities present discussed the importance of menstrual hygiene in schools and 20 days training to teachers on menstrual hygiene was advised. Dr. Dinabandhu Sahu explained menstruation as a biological process's. Yumi Bae, UNICEF believed that social taboos during menstruation only enhances the trauma that many adolescent girls are already going though during menstruation. In terms of hygiene, she stressed on usability and feasibility of toilets when being constructed. She showed her willingness to partner when required for menstrual hygiene related initiatives.
Different workshops were organized to involve participants and improve their awareness on menstrual hygiene in an entertaining way. One workshop, involved screening of an animated movie Maitri on menstruation which showcased a classroom setting where Asha didi was talking with girls in a class room about menstruation, its process, physical and hormonal changes, nutrition intake to be followed with graphic pictures. The movie touched and clarified all the points that many school girls have in mind. A Q&A session was followed with audience to clarify further any doubts. In a workshop on MHM lab, Implementers and practitioners (CSO, adolescent girls) and Doctors talked about the biology of menstrual cycle and the various misconceptions regarding menstruation which helped in dispelling age old taboos. In the third workshop of Interactive games, Implementers and practitioners played a uniquely designed game of snakes and ladders. It was designed in such a manner that in different houses different myths and different facts about menstruation were stated. If you land on a myth the snake eats you up and if you land on a fact, the ladder takes you up.
Release of TV spots and intelligently made short promotional films addressing the concerns of MH held the attention of the audience. Esteemed guests present congratulated aaina and Water Aid to bring the issue to such a platform and organize a workshop on a subject that is a taboo. 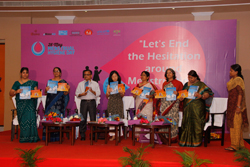