One of the most awaited events of aaina, We Care Film Fest was organised on Oct 14th and 15th October 2014. The festival celebrating diversity and spreading awareness about disability through the medium of films attracted students, children with disability, social activists, government officials, non government officials and media. The event initiated with the inauguration of the poster exhibition by Mr. Ashok Ch. Panda, Minister of Culture and Tourism of Odisha and Ms. Yumi Bae, Chief UNICEF, Bhubaneswar, Odisha. Poster competition with the theme of celebrating diversity and inclusion of people with disability was the special feature this year of We Care Film Fest. Motivating and eye catching posters were prepared and displayed around the corridor.
Ms. Sneha Mishra, secretary aaina welcomed the guests, followed by a Tribute to epic theater artist and associate of aaina, Late Dr. Sarat Pujari. The event continued with showcasing of short documentaries on disability issues and reflections and sharing about the festival's experience by guests of honors. Mrs. Priya S Mohapatra, CSR Head, TCS, Mr. Nilamadhab Panda, Eminent Film Maker, Shri Shantanu Mohapatra, Eminent Musician , Miss Yumi Bae , Chief UNICEF Bhubaneswar, Mr. Ashok Ch. Panda , Minister tourism and culture govt. of Odisha and a vote of thanks by Ms. Lalita Missal President aaina.
Besides, screening of short documenters on disability in general, 2 specific Panel discussions were organised with the themes of "Autism and Management and "Women with Disability". Discussion with guests of panels was conducted after viewing the thematic documentaries. To change the mood, an entertaining session with famous satiric poet Mr. Gyan Hota was held, which was thoroughly enjoyed by all the audience. At valedictory session, various guests delivered their views, and the jury was facilitated afterwards. Winners of the poster competition were announced soon after and Mrs. Gayatri Pattnaik gave a vote of thanks for the day one of the event.
The second day began with an awareness rally for the White Cane Day where staff of NGOs and children with disability and staff of aaina blind folded, holding white canes marched from Ekamra Haat to Institute of Engineers. The second day of film festival was inaugurated by Mr. Ananta Mohapatra, Prof. Malabika Roy, Mr. Ambika Nanda, UNDP, Miss Alka Gupta , UNICEF , Bishakha Bhanja, WAI. The agenda of celebrating diversity was maintained by the screening of several award winning short movies with national and international entries like "Sometimes I can Fly(India)", "Maalgadi(India)" , The Beyond Boards (Belgium)". A Panel discussion was conducted on the theme of Celebrating Diversity upon viewing of series of documenters on the issue of disability and diversity. The most awaited section of the event, screening of entries for the competition took place soon after the lunch. In total 31 movies were screened within three categories of "Debutant", "1 minute" and "5 minute". The quality of the movies was appreciated by all the jury. Encouraging efforts were seen from the debutant category introduced as a separate this time. Mr. Satish Kapoor appreciated the level of efforts put in and considered many of the movies to make up to national level. Disability was reflected in different ways through movies and moreover the ability in disability was reflected well in few movies like Urbashi and Sakhyam. A session with special observers was organised after the screening where film makers got to interact with Mr. Subash Das . Upon valediction to guests of honors present, the much awaited results of the movies were announced. The documentaries "Lets Bicycle Together" by Snehasis Das, "Mind the Gap" by Ambuja Satapathy, "Urbashi" by Santosh Panda, "Ripples of Colours" by Diptimayee , "Inner Eye" by Jitendra Sethi, "Invalid God" by Jitendra Sethi, "Sakhyama" by Falgu Satpathy and "Joker" by Life Entertainment were the warded movies. A vote of thanks was given by Ms. Sneha Mishra secretary aaina where she especially stressed on the efforts of youth and volunteers for making We Care Film Fest a success 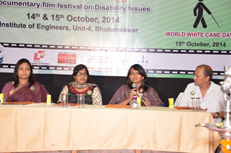 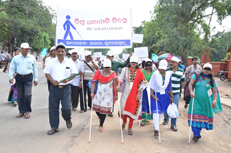 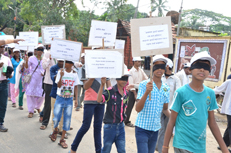