On 2nd and 3rd October 2013 the wheels of We Care Film Fest halted on the soils of Bhubaneswar to celebrate its 3rd consecutive annual event in Bhubaneswar coinciding with the world cerebral palsy day. The objective of the festival is to promote inclusion by celebrating diversity and generate awareness among the audience about persons with disabilities, their potentials, challenges and their achievements through the medium of films.
This was the 3rd time that aaina organized the We Care film fest in Bhubaneswar. Many young people from different institutions and professional fields, school students, children and people with disabilities, staff working in social sector, film enthusiasts and the general public in large number attended the festival.
As festival was inaugurated on 2nd of October 2013, also observed as the World Cerebral palsy Day for the first time in India, aaina organized a rally from Ekaamra Haat to the Institute of Engineers which was also the venue of the programme for the rest of the day . About 200 people enthusiastically joined the rally including children and persons with cerebral palsy, parents of CP children, teachers, media, NGO & INGO representatives, Govt. Officials etc. The rally was flagged off by Mr. Bibhuti Bhusana Pattnaik [Director Disability] & Mr. Sasank Padhi [State Programme Manager, Save The Children].
A formal inauguration took place at the venue as all the guests lit the lamp after the rally, "One Minute To Change My Life"- a film produced by aaina on the lives of persons with Cerebral Palsy was screened. The inauguration session also witnessed the felicitation of children & persons with cerebral palsy who had excelled in their respective life despite their disability. A Quiz Competition among the students of schools and colleges was another high point of attraction collaboratively organized by aaina & Odisha Quiz Association. Most of the questions were on General Knowledge and a segment on Disability. The questions for seniors were very competitive and challenging but the students appreciably answered many of them. The students of Silicon College of Bhubaneswars grabbed the first prize.
The tense atmosphere was transformed into very entertaining environment as Mr. Gyana Hota the famous satire poet, came upon the stage. The entire hall was filled with laughter and loud applauds from his satires and remarks not forbearing many of the guests. The show worked as an icing on the cake on the 1st day of the program.
The 2nd day was all totally a new day for the organizers as well as for the participants. Secretary aaina, Mrs. Sneha Mishra welcomed all and briefed on the 1st day program. Eminent guests present were;- Mr. Vishal Dev [VC, BDA], Dr. Malabika Rai [Educationist & Film personality], Mrs. Kasturi Mohapatra [Commissioner for PWDs] and Mr. Satish Kapoor [Founder, Brotherhood]. National Award Winning documentaries from the privies year were screened followed by speeches by eminent guests. "ACCSEX" a 52 minute film by Ms. Shweta Ghosh, New Delhi was screened, This Film explores notions of beauty, the ‘ideal body' and sexuality through four storytellers; four women who happen to be persons with disability. A panel discussion and video-conferencing with Shweta and the audience was organized after the movie. A workshop demonstrating software for the visually impaired person launched by TCS was organized. Queries from the audience regarding the software were answered as well.
Second half of the event began with screening of short documentaries of one minute, three minutes and five minutes on the issue of disability submitted by local artists for the competition. Twenty seven numbers of submissions this year broke the previous records in terms of the number of submissions. Moreover, a special section on one minute movies by children (under 18 years of age) was introduced this year. The audience watched the movies with great interest and patience for the whole session of one and a half hours with applauds of appreciation after each movie. Mr. Satish Kapoor however also commented on the higher quality expectations from the documentaries as the movies need to be at par for national level competition.
The results of the movies were announced towards the end. All the children were given special award for the submission of the movies. Santosh Panda was the star of the competition as he bagged prizes in all the three categories. The guests mentioned the experience as an effective tool to make people aware of disability issues. In the end was the curiously awaited lucky draw of the raffle tickets. Ms. Sneha Mishra, secretary aaina gave a thank you note to the audience and as always did not miss out on mentioning each and every person's contribution from volunteers to organizers for the success of the event. 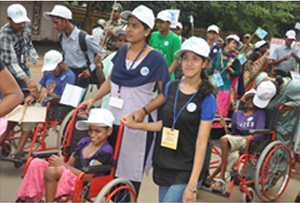 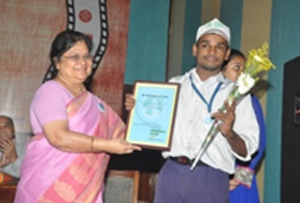 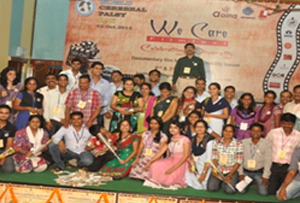