Sangeeta Behera, a 14 yrs old girl with speech and hearing impairment lives with her parents in Tentuligarh village of Kandhamal. She attended school regularly up to class 5 and was interested to continue her studies. However, with new school and environment, she had to face new challenges. She was heart broken to realize the reluctance of staff in her participation in regular activities and extra-curricular activities being held at school. Students mocked her because of the deformity she had. Witnessing such behavior and attitude, she not only discontinued her studies but was even hesitant to go anywhere else. A Children Club was formed in Tentuligarh village soon after. The staff explained to the children about the aim & objective of the club where participation and inclusion of all children and rights of children with disability were of prime focus. After several discussions children realized that every child is equal.
The president of the club along with few children as members went to Sangeeta's house to inviteed her to join the children's club. Still depressed from her previous experience, Sangeeta declined the offer. None the less, members continued to visit Sangeeta's house to convince her parents and Sangeeta and finally she joined the children's club. With time, the members of the club suggested Sangeeta to re join school and assured that she will never face any kind of difficulties like before. The members of the children's club also came forward to share the situation with members of Child Protection Committee. The staff of the children's club and aaina discussed Sangeeta's case with the school authorities and they agreed to enroll Sangeeta in school. Now Sangeeta goes to the new school regularly. Finally she has battled disability and enjoys her life 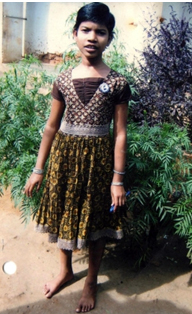