Sixteen villagers at G.Udaygiri in unity get a job through MGNREGA

On April 8, 2012 aaina's PACS staff organized a meeting in Gadingya village of G. Udaygiri to discuss MGNREGA job policy. A need of it was strongly felt as many villagers were unaware of the program and those who were, did not receive payments on time. Both male and female villagers, children, ward members and head of the village attended the meeting. The major topics for discussion were on the Vobjectives and vision of the organization, MGNREGA's employment schemes, process of receiving payment and insurance/ pension schemes. The staff assertively told card holders about their prevailing right to job, and encouraged them to take systematic and unitedsteps in case of discrepancy.

The achieved result of the meeting was very encouraging. The villagers were well aware of MGNREGA and thus much more confident to take suitable actions. They came together and formed a committee of 32 male and female members in that Shramik Sangha. They elected a President and secretary of the sangha as well. After one more meeting villagers who did not have job cards collectively with the help of gram sathi applied for it.

This was not all. On April 9, 2012, sixteen unemployed members of "Gadingia Shramik Sangha" went to Kalinga Gram Pnchayat along with their Job Cards and Post Office Passbook and demanded a job. Gram Sathi was cooperative and all the villagers who demanded a job returned to their village with the job gurantee. On April 15, 2012 job through MGNREGA was finally provided to all the 16 villagers. Now the workers also present their problems and get solution through group discussion in Shramika Sangha. 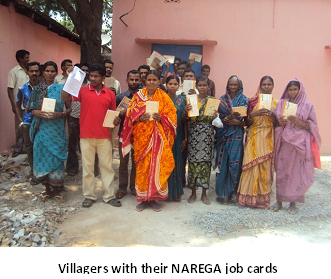