From State to National award winners!!! The documentaries showcased at We Care Film Fest 2011 wins the hearts of much wider audience at a much higher level.

aaina, felicitated the award-winning film-makers on the occasion of Hellen Keller's death anniversary on June 1, 2012

Akin concept wise, all these films based on disability issue depict different aspects of the differently-abled people. These short films participated in the documentary and short-film competition in October, 2011, during the ‘We Can' film festival organized jointly by ‘aaina' and ‘Brotherhood Foundation' in Bhubaneswar. Impressed with the films, Satish Kapoor from Brotherhood Foundation insisted to take the movies to national level.

Present on the occasion, all the four film-makers shared their experiences of making their respective short films. Eminent personalities form film and theatre fraternity and social activists including Sarat Pujari, Anant Mohapatra, Samir Ghosh were present at the felicitation ceremony to congratulate the four film- makers on their achievement.

aaina's staff is busy again for the preparation of next We Care Film Fest to be held on October 14th and 15th, 2012. The staff expects similar response this time as well and hopes the message of ability to be spread to diverse audience. 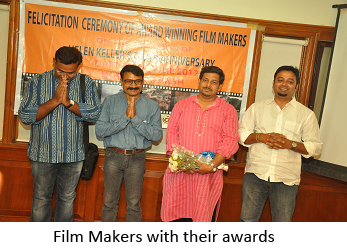