AAINA in collaboration with UNICEF organized Kallola awards event 2018 which was held on the 20th November 2018 at Hotel Hindustan International. The theme for this year Kallola was Water & children: Safe water every child's right. There were 53 films received this year for the contest and 11 films got shortlisted for screening. 20th Nov being the World Children's Day with a theme #GoBlue this year added value to the event. 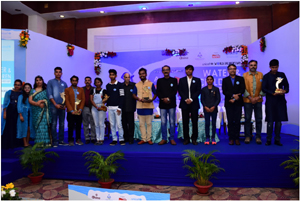