Aaina worked towards creating awareness and stronger implementation of PC&PNDT(Pre Conception Pre Natal Diagnostic Test) Act in Ganjam District to safe guard the girl child. The project is operated in 50 villages having low girl sex ratio with the active support of National Health Mission & Zilla Swastya Samiti, Ganjam .
The core objective is to minimize the skewed ration by making people understand the importance and need of girl child for the society. One of the prime activities is Block level gender sensitization program for the GKS (Gaon Kalyan Samiti) members) including front line workers, PRI members and direct service providers to enhance the understanding on gender and gender based violence and its impact on girls and women of our society in relation to declining sex ratio.
College level Gender Sensitization program for students, and future parents are sensitized with importance of girl child. Three college level gender sensitization program with 300 students were organized that also included showcasing films impacting their attitude
Village level Save Girl Save Nation Campaign with a similar concept is another effort at village level spreading awareness on importance of girl child and the discriminations against them. Celebration and Observations such as Save Girl Save Nation Campaign at district level is yet another initiative where the district level campaign launching program touched around 100 Gaon kalyan Samiti members, college students, lecture, parents. Media Advocacy on Save Girl save Nation Campaign was conducted in Berhampur on 24th March to create awareness about the skewed ratio and the roles public can to play to increase the ratio. 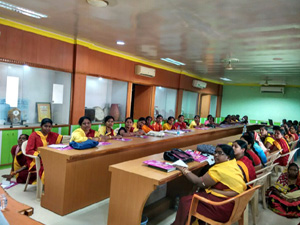