KALLOLA (happy sound of bird- song at dawn) is a Short Film Contest on Child Rights initiated by UNICEF, in partnership with Aaina in 2015. Now, in its third season, it once again invites creative minds from Odisha, to speak out and raise awareness on the rights of children through the medium of short films.
This years‘theme was "End violence against children- Soch Badlo". The theme blatantly challenges the existing stereotypes in our behavior or action contribution towards child violence. It encourages to reorient our and viewers' attitudes towards "accepted behavioral norms" towards violation of child rights in the immediate surroundings. The objective is to create mass awareness on issues related to rights of children through this platform.
This year Kallola competitive section received 43 short film entries breaking all the previous records. Different issues such as right to education, freedom of decision making, sexual harassment, verbal violence etc were covered in short films.These films were screened for the Jury for selecting the best 3. Like every year with Adult jury there was children jury, represented from different schools. In non competitive section of Kalolla, the children from Child Care Institute participated as film makers. They made five films in which they have done scripting, shooting and editing. The final Kallola film screening of competitive and non- competitive sections films and awards distribution will be held in November 2017. 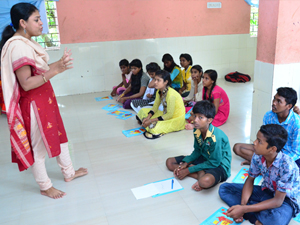 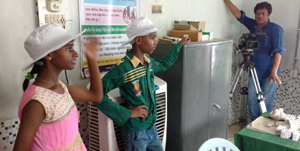