To make probable migrant women aware of their rights, the International Migrant Workers' Day was celebrated in Goudgotha panchayat of Surada block by Aaina on December 18, 2016. The sarpanch of Goudagotha, Executive officer and 5 ward members attended the meeting with the representative from print media were present in the meeting. There were 130 participants. To begin, an awareness rally was organized covering entire G.P head quarters. The block coordinator briefed participants on human rights and fundamental political freedoms of migrants. As large numbers of women migrate from Gaudagotha to other states for work, participants were made aware of the facilities provided by the govt. for the migrant labors.
Women migrant workers were discussed as one of the most invisible and deprived groups of people having no voice to claim their rights. The economic, social, cultural and political factors influence the decision to move. Different schemes of the government that benefit the women such as nation maternity benefits and social security schemes were discussed. Migration was discussed as an expression of the human desire for dignity, safety and a better future.
Mr. Prashant Kumar Baliyarsingh, ward member of Gaudagotha appreciated the initiative taken by aaina and SEWA. He gave more emphasis on safe migration and suggested that the people who migrate to other state should know about the work, the employer, about the working condition.
Mr. Kishore Pradhan Block Coordinator brought forward the specific problem faced by the migrant workers of Gaudagotha and Surada block arising from lack of knowledge and information regarding their rights and understanding that they are workers. The workers were given a platform to come forward and raise their voice for their rights. The meeting ended on a positive note of women expressing their desire to meet again in their village meeting and also they started the union process. 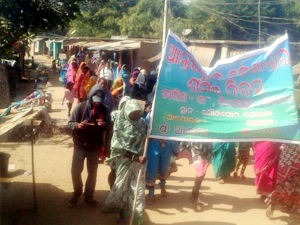