Aaina organized We Care Film Fest 6th edition on January 16 and 17. We Care is a traveling festival to create awareness about disability issues through the medium of films and to foster integration in society by spreading the message of ability. We Care film fest gives fillip to the Rights Based Approach where Persons with Disability are considered Persons first. We Care aims to remove the myths, misconceptions, prejudices and stereotypes about disability among society through the medium of films.
The festival was attended by 651 people in total from which 127 children were from special schools and 78 from colleges. Guests of Honor included Ms. Latika Pradhan, Chairperson, Odisha State Social Welfare Board, Ms. Anu Choudhury, leading film actress, Mr. Jitendra Biswal, Actor, Ms. Asha Hans VEP, SMRC Other audience and guests included authorities from CSOs, Government, Film World and Corporate.
The festival began with a seminar on "Making Rights Real" keeping different aspects of People with Disability in focus where audience had an opportunity to interact with the resource people. The speakers for the sessions were Mr.Pradyumna Kumar Rath, Founder member Aaina; Ms.Kalika Mohapatra; Mr. RK Sharma, VRCH, Mr.Gourishyam Panda, RARE. The Session was presided by Ms. .Asha Hans, EVP SMRC. Other highlights of the event were showcasing national and international award winning movies on disability, speeches by guests from different back grounds and of course the short film competition inviting entries from local and other artists on the issues of disability. Aaina received 9 short films for competition. All the films though on the issues of disability conveyed positivity, hope and were inspirational. A very special guest Mr. Jitendra Biswal graced the occasion. He himself is quadriplegic but nothing stopped him from achieving his goals. He was featured in the book We Can, 100 inspirational stories of differently abled and was awarded by NALCO for being the first ever quadriplegic to act in a cine world. His movie "Two desires and a Dream" will be released in Febuary.. While addressing the audience he conveyed that though he along with many other people with disability has achieved a lot in life, people with disability are still seen with pity by many, which really hurts. Responding to his address, the President of Aaina pledged, requesting the audience to delink pity from disability and see the qualities and skills first.
The youth, people and children with disability were rejoiced being part of the festival and thrilled to share the space with celebrities. It was an opportunity for them to come out of their restricted boundaries and get exposed to the world of diversity/ Ms. Latika Pradhan, Chairperson, Odisha State Social Welfare Board, appreciated the cause and efforts o We Care and suggested that the festival should be celebrated in every district of Odisha.
In 5 Minutes Category, TARA CAN by Asutosh Pattnaik got the 1st prize, ND KHWAHISHEIN by Sadanand Beltharia got Jury Choice award. In 1 Minute Category WE ARE ALIVE by Sangram Keshari Sahoo got Dr.Sarat Chandra Pujari Memorial Award 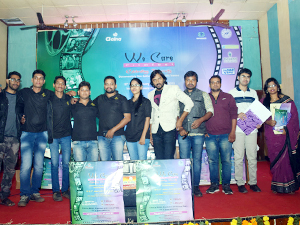