Aaina works for the rights of domestic workers and in specific for their safe migration. On June 16 International Domestic Workers day was celebrated by Aaina where , domestic workers in Bhanjanagar & Surada were encouraged to organize and form union to make them selves visible and have collective voice and strength being a part of the Sewa union. Some of the government officials along with the PRI members, representative from print media were present in the meeting. One hundred forty participants came together for the celebration.
An awareness rally was conducted as well. The block coordinator explained participants about Convention 189 on Decent Work for Domestic Workers. He recognisedthat the Domestic work remains one of the most undervalued and least regulated forms of employment.
The guests stressed that Policymakers, legislative bodies and people need to recognize the existence of an employment relationship in domestic work. Such a view would see domestic workers as not just "helpers" who are "part of the family" but as employed workers entitled to the rights and dignity that employment brings with it. They also asked the workers to come forward and raise their voice for their rights and also discussed about the safe migration and other schemes and facilities.
A quiz competition was organized and the questions were based on C-189, regarding MGNREGA and other government schemes and the winners were felicitated by the guests. Maximum focus was given on how to link the women with different livelihood opportunities decreasing the chances of migration. 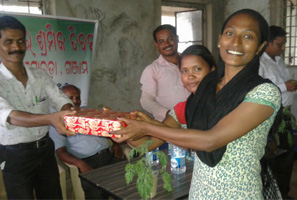 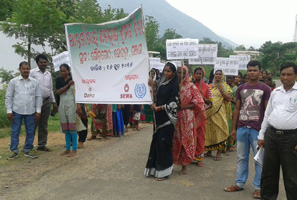