Ms. Pragyan Pridarshini (NAWO) was the resource person. The participatory activities at the training involved discussion and sharing of violence and problems women face in family, panchayat and community. It was apparent from discussions that there was lack of support and respects for women at all the three set-ups. Representatives came up with solutions such as unity among the women representatives, formation of forum of women representatives and understanding between man and woman. Apart from discussion a film on the role & responsibility of the PRI members was screened as well.

Ms. Pragyan discussed the need of creating a women friendly climate in the society by the government through formation of a State level Women Panchayat. Representatives Association (SWORA) a state level federation of women representative has been formed to help the women in asserting their dignity and rights. Ms. Swaha Das & Basant Patnaik discussed about RSBY, Nirman Shramika Bima, NRLM. The meeting was ended by a vote of thanks from Mr. Basant Kumar Pattnaik, Education Coordinator, aaina. 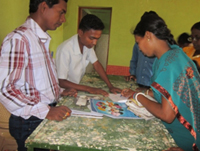 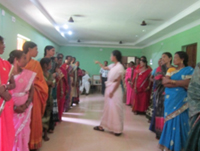