The 6th Change Makers Assembly took place at Town Hall, Kendrapada on 17th February 2013. His Excellency, the Governor of Odisha Sj. Muralidhar Chandrakant Bhandare graced this occasion by his presence as the Chief Guest.

Guest of Honor Smt. Kasturi Mohapatra, State Commissioner Persons with Disability hoisted the Flag of We Can and started the programme. As soon as the flag was hoisted the Campaign song of We Can was played. After the flag hoisting Mrs. Sneha Mishra State Coordinator We Can escorted Smt. Kasturi Mohapatra inside the venue. Along with Smt. Kasturi Mohapatra, Mrs. Sneha Mishra and other members of We Can paid homage to Late Mrs. Kadambani Samal who was the district partner of Anugul and left us last year. One minute silent prayer was done for Late Mrs. Kadambani Samal., For welcome. songs were sung in this joyous occasion by District Partners and participants. All anxiety and waiting came to an end at about with the beating of drums and blowing of trumpet indicating the arrival of the Chief guest His Excellency, the Governor of Odisha Sj. Muralidhar Chandrakant Bhandare. He presented valuable ideas on "OPINION OF CHANGE MAKERS OF WE CAN ODISHA ON PROPOSED YOUTH POLICY". The Nodal members felicitated His Excellency, the Governor of Odisha, and was requested to light the lamp in memory of 50 billion missing women

Mrs. Sneha Mishra shared her views and experience of the 6 years of We Can in Odisha.Mrs. Kasturi Mohapatra stressed on the strength and unity of WECAN campaign. Mr. Durga Prasad Behera Collector of Kendrapada appreciated the work of the campaign and its importance due to heinous acts as that of recent Damini's rape case.

His Excellency also remarked that Violence against Women is an issue of serious concern in today's World. He requests all the victims to raise their voices against the violence they have faced. Core Team members and volunteers of We Can to presented mementos to His Excellency, the Governor of Odisha,

The first plenary and the second plenary after lunch on "Challenges in combating violence women was conducted afterwards":

Ms.Bharti Chakra, Save the Children talked at length on the environment that prevents children especially girls from going to school such as common bathrooms for boys and girls, lack of privacy etc.

At 5:15 pm the last plenary got over. Afterwards a beautiful candle Light Rally with heart throbbing slogan to "end violence against women"and more remarkable excitement and enthuse of 180 people marched all the city. The rally almost covered 2 km and each ounce of marching step of the rally created a pound of awareness to end all types of violence against women among the people of Kendrapada.

A colorful cultural programme was presented by the students of Kendrapada which was enjoyed by everyone. After the cultural programme the Star Change Makers of every district and the district partners were felicitated for doing a marvelous work in their own districts. Mrs. Sneha Mishra was facilitated for keeping everyone together and leading everyone in the positive way. Last but not the least as per the tradition the bringing down the flag of We Can was done by the participants. As per the decision of the campaign the next assembly is scheduled to be held at Bhadrak and accordingly flag of We Can Odisha was handed over to the functionaries of Bhadrak Nodal. 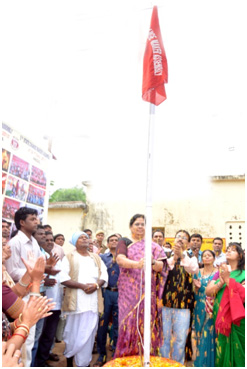 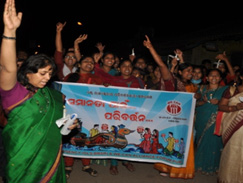