Aaina has been actively engaged with group members of Kishori Balika through awareness meeting on personal & menstrual hygiene. Personal and menstrual hygiene covers the importance of better sanitation and its impact on reproductive health. Rigorous interaction with group members on health and hygiene put forward the hazardous results of open defecation such as its affect on health and on reproductive health; open defecation as a cause of polio; and government. schemes related to sanitation. Members also learnt about the facilities of government through Swachh Bharat Mission for the rural people.
Like many group members Rita and Gita 2 young sisters of the group followed the pattern of open defecation. But Gita is also one of the leaders of the group. Equipped with all the information, Gita realized the vital need of toilet for health and well being. She shared her thoughts with parents and discussed the facility of Rs.12000 from government to build a toilet. She requested her father to do the needful for a better health. Her father being mason the construction process became easier. After taking advantage under SBM policy, a toilet was constructed. . Now they know that good sanitation is a better way to improve the health status & the importance of having a toilet for the same. They also proved to be role models for rest of the community. 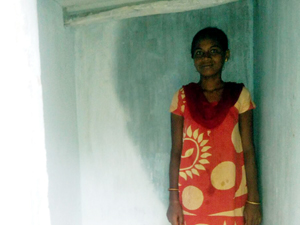