Pinky finds her way towards freedom

Pinky, a girl in her early 20's belonged to a very poor and underprivileged family, residing in Surada block in Ganjam district of Odisha. Due to the difficult conditions of her family, her life was a continuous struggle. Since the age of 6 years, she worked in different cities and under awful situations.
Both her parents are very old, and work as daily wage laborers earning very minimal money. Left with no other choice, her elder brother went to Kerala to work as a manual worker but he too did not earn much. Pinky was 6 years old when she also went with her brother to Kerala in search of work. She worked as a domestic help but the remuneration that she received was very low although she had to do a lot of work. For an entire year she earned Rs.2000. Later, she migrated to Goa for a year and then to Mumbai for 3 years. As she earned so little she became restless and hopeless. Then she got an offer to work as a domestic help in Hyderabad. From the wage she got there, she was able to send money home to her parents.
But one thing that always concerned her was the precise amount of money that she actually deserved to receive. She was totally unaware of the fact that the money that was sent to her was through a third party. Under such circumstances, she could not even gather the courage of asking the amount because of the fear of losing her job.
Later as she was visiting her village during leave for 2-3 days, she heard about the pre departure training program of "Work in Freedom" Aaina at Ganjam district. There she understood about domestic work, the rights of the worker and how to migrate safely.
When she decided to return back to her work, she was better informed about her rights. She searched for a new job and this time before joining she finalized with the owner regarding the payment first. he got 7000/ monthly and sent the money to her house directly. Her family expenses were all covered and debts were repaid. Pinky's enormous and continuous hard work and courage paid off. 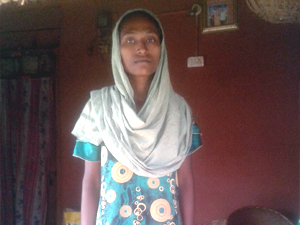