The award event of Kallola, a short film contest on child rights organised by aaina in support with UNICEF, was held on the eve of 20th March 2015, at Hotel Swosti Premium, Bhubaneswar. The event was attended by all film makers/ their representatives, members of Jury Mr. Anant Mahapatra, Mr. Lalatendu Rath, Ms. Manipadma Jena, Mr. Bata Krushna Tripathy, Mr. Raju Raman and Mr. Biren Das, student representatives of Children Jury with their parents, dignitaries from the government, members of Aaina, UNICEF and ZEE Kalinga. The Chief Guest for the evening was His Excellency Governor of Odisha, Honorable Dr. S C Jamir and the Guest of Honour was noted film director Mr. Sabyasachi Mahapatra The event commenced with the felicitation of all the 23 participating film makers by the esteemed members of the Jury. The Jury chair person Mr. Anant Mahapatra was felicitated by Ms. Meera Banik, EC Member aaina. This was followed by the felicitation of the Jury members by Mr. Sabyasachi Mahapatra.
The award ceremony started with the arrival of the Honorable Governer at 6:00 PM. After the welcome address by Ms. Sneha Mishra, Secretary aaina, and speeches by Ms Yumi Bae, UNICEF Chief Odisha Field Office, Ms. Urja Bhuyan, Representative of Children Jury, and Mr. Anant Mahapatra, Jury Chairman, the 10 shortlisted films selected by the Jury were screened. All these entries were received with much appreciation and enthusiasm. Finally the awards were declared and trophies were handed over to winners by the Honorable Governor of Odisha. The winning films were "The Right Glass" by Biswanath Rath (Children's choice award). "Chotu" by Biswajit Kuldi (Jury's choice award) "The Voice" by Santosh Panda(1st prize), "Build Knowledge" by Soham Dutta (2nd prize) and "So Sweet of You" by The Mantrra represented by Gaurav Mohanty (3rd prize).
The award ceremony was followed by speeches by Mr. Sabyasachi Mahapatra and the Honorable Governor of Odisha Dr. SC Jamir, Ms. Yumi Bae, Chief of UNICEF Odisha then felicitated the chief guest for the evening, Honorable Governor Dr. SC Jamir and Ms. Lalita Missal, President aaina, felicitated the guest of honor,. Mr. Sabyasachi Mahapatra. The event ended with dinner for all 200 guests present. Everyone appreciated the initiative wholeheartedly and lauded the efforts of the organizers for such a successful journey. ‘Kallola" a short film contest organized by aaina was to build awareness on the rights of children through the medium of short films with specific objective of spreading the word against "Violence against Children". The success of the effort inspires aaina to take it to the next level and share it at different public platforms. Zee Kalinga, media partner for the event has gracefully agreed to air these films in their channel to raise awareness towards the cause. 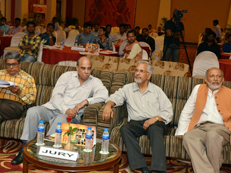 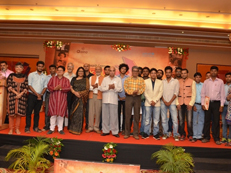