Ceremony at TCS on 14th March 2014. The Joy of Giving week's efforts finally bring smiles to the faces of children for whom it was meant. The felicitation ceremony took place on 14th March 2014 at Barabti Auditorium, TCS BBSR in the presence of the whole team of ASUWASAN and the eminent persons of TCS and aaina team. The program started at 12 PM with a welcome speech from Ms. Amrapali Pattack. She presented a brief note on the initiatives taken by ASUWASAN team in collaboration with aaina by placing a Wish Tree during the Joy of Giving week in October 2013 and as a result total 42,500/- rupees had been collected for the children of Amo Vidyalaya to meet some of their basic needs. The guests present during the program were Ms. Priya SM, Mr. Manoj Panda, Mr. Prasanta Panigrahi (from TCS), and Mr. P.K. Rath, Ms. Swarna Mishra and Ms. Jyoshna Sahoo from (aaina) along with Mr. Bipin Mohanty from JOG. The guests of TCS spoke about the association of TCS with aaina through We Care Film Festival since 2011 and how the association motivated their employees to make films on disability issues and present during the film festival. They also pointed out some of the other CSR activities undertaken by TCS in different forums.

This was followed by a short presentation about aaina'a work by Ms. Jyoshna reflecting the issues aaina is working on, target people, geographical area covered , strategies, programs etc. Then the hook of the program that was giveaways to the children took place. Items like, Wheelchair, hearing aid, Blind Sticks, Candle Making Machines, Schools Bags, Tiffin Boxes were distributed to the children, who were very happy and expressed their feeling by singing songs, cracking jokes and telling their achievements to the audience. The program came to an end with a formal vote of thanks by Ms. Amrapali Pattnaik to all the attendees and specially children of Amo Vidyalaya. 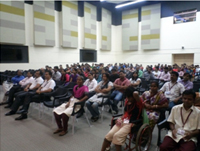 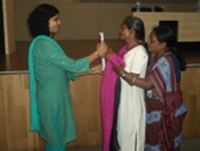