The checkup of forty five rural women in the Health Camp in Barang revealed vaginal infection due to unhyginic conditions as the primary health issue among women. Some more issues which came in front were low eye sight, under weight, stomach ache, body ache, and toothache .

aaina organized a Health Camp for women on 31st January 2013 at Amo Vidyalaya, Sitarampur Barang. Dr. Gayatri Mohanty, Rtd. The gynecologist was present as the resource person. Mrs. Sneha Mishra, Secretary of aaina and Mr. Pradyumna Rath, Board Member of one were present at the event.

The objective was to know about the health issues prevailing among rural women as they seldom come out to get themselves medically examined. Forty Five women attended the Health Camp from the villages close by. The medicines for women at the Health Camp were provided by the Indian Red Cross Society for free. Red Cross Society also sent a pharmacist, Mr. Biswa Ranjan Dash for assistance.

It was apparent from the Health Camp that the issues of the patients had been existing for a very long time. The women were made aware that ignoring health issues can create bigger problems in the future. Dr. Gayatri Mohanty advised to have such Camps on a regular interval for early detection of health issues among women. Mrs. Sneha Mishra also provided valuable advise to the women regarding hygiene to prevent infections.

aaina staff is thankful to Dr. Gayatri Mohanty and Indian Red Cross Society for their support to make the Camp successful and plans to conduct similar events in the best of their capacity 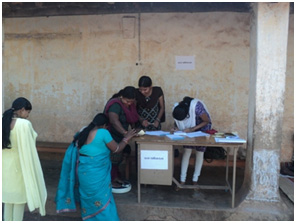 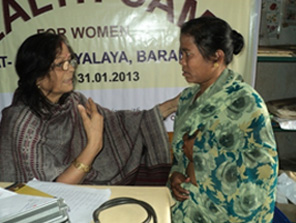