The 7th We Care Film Festival was held on 16th Jan 2019, at Institute of Engineers, Unit-IV, Bhubaneswar by Aaina in collaboration with Brotherhood . Films of 1 minute & 5 minute were called for the contest and the award winning film makers were given away cash award with certificates during the occasion.

Ms. Urvashi Dash, the protagonist of the documentary "urvashi" got felicitated along with Mr Santosh Panda the film maker of "urvashi" during the occasion.

The eminent Jury this year were Mr Baikuntha Panigrahi, Ms Chumuki Dutta, Mr Kapilas Bhuyan, Mr Lalatendu Rath, Mr Snehasis Das and Mr Subas Das expressed their views about the films received this year and encouraged the film makers. This year the focus was on two benchmark disabilities e.g. Cerebral Palsy and Intellectual disabilities and 18 films were received for the contest. 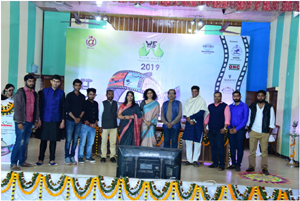