Aaina in partnership with UNICEF Odisha-State Chapter organized Kallola, short film contest on child rights at Swosti Premium on Child Rights at the on 25th November 2017. he theme for Kallola 2017 was ‘End Violence against Children…SOCH BADLO!'(Change your attitude).
Five short films produced by fifteen adolescent children as part of Kallola Junior were screened at the event. The children were selected from a Child Care Institution under the Integrated Child Protection Scheme (W&CD Dept.), Govt. of Odisha and in partnership with the Department of Women and Child Development, Government of Odisha.Eminent Jury members reflect their views on the films and were felicitated for their commendable work.
Eminent film artist and film maker Ms Aparna Sen was the Chief Guest. She said "watching films of Kallola 2017 made my memories come back of the first experience of looking through the Camera lens. Parents and people should not take children for granted but rather make their life joyous. The power of cinema should be more used and more films should be made to spread the awareness to end violence against children".
Ms. Yumi Bae, Chief, UNICEF Odisha, gave her remarks on the program and said, "I appreciate and congratulate all award winners and participants in the contest, including children who took an interest in this theme - ending violence against children. I am also grateful to our partners with whose support the thought provoking films will reach wider audiences and trigger a dialogue around ending violence against children."
Ms. Sneha Mishra, Secretary, Aaina Sharing her thoughts on the occasion, appreciated the overwhelming response of participants to receive 44 films entries this year reflecting popularity of the event and spread of awareness and consciousness among people n child rights. We hope these films are going to storm people's mind to change their perception on child rights and triggering them to take action to end violence against children."
Ten short listed films were screened and the awards were announced. BACHPAN' by Mr. Sangram Keshari Sahu, received the 1st prize. ‘ASHA GOBARA RA' by Mr. Biswanath Swain won the 2nd Prize and also the Children's Choice Award. ‘SOCH BADLO' by Mr. Ramachandra Meher received the 3rd Prize. The Jury's Choice award went to ‘THE OPEN DOOR' by Suraj Pattnayak. 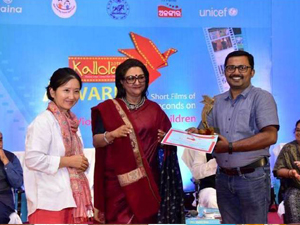