Puppet show on safe migration touches hearts of the community

aaina staff organized 20 puppet shows in different villages of Bhanjanagar and Surada for its project Work in Freedom with an objective of empowering potential women migrants adolescent girls and their families, and community to enable safe and informed migration, and to facilitate linkages to government and non-government services and schemes
Puppet show has been one of the most effective means for aaina to spread social message in community as people can directly relate with an issue and internalize it. Theme of "Self Respect of Women" was exhibited beautifully reflecting hardhips and violence faced by women in the name of domestic work especially when a woman has migrated. Awareness regarding safe migration was given in the last.
The first 10 shows were organized in five GPs of Bhanjanagar. The introduction song on livelihood and the importance of domestic work captured the audience straight away. There was an overwhelming response by villagers and few of them even gathered public from nearby areas to watch the show and made necessary arrangements. The audience was moved by the scene depicting a situation where a woman and a child have to migrate forcefully in search of job leaving their native village and friends behind.
Besides, vital messages on safe migration were conveyed. Main information conveyed included: With whom to share address and with phone number; clarifying pay; ensuring to give information to the local Sarapanch, word member, block officials, SHG members and police station; taking identity proof-voter ID, Adhar card etc. The puppet show was successful in engaging community emotionally along with conveying important information pieces on safe migration 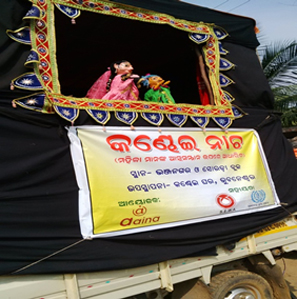 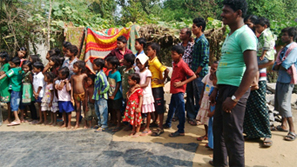